Vinpearl Safari is an animal conservation and care park located in the north of the Island Phú Quốc near the Vin Resorts. Unlike its name suggest, Vinpearl Safari is closer to a Zoo than a traditional African Safari, even though a portion of it is actually experienced from within a vehicle.

To enter the Vinpearl Safari park you’ll need to pay 650,000 vnd (27 euros) for an adult and 390,000 vnd (16,50 euros) for kids and seniors. For very small children like many other attractions, the entrance is free. The parc is open from 9am to 4pm, so it closes fairly soon and you will have to come soon to see everything.

It has to be noted that the entrance of the attraction is not accessible by foot. The road from the main gates to the entrance must be somewhere between 3 and 5 kilometers of road.

The Vinpearl Safari park is fairly big, so much so that they offer a shuttle service with electric carts for 100,000 vnd. Note that you can also rent a private and smaller vehicle for 1,500,000 vnd.

The attraction can actually be walked by foot in a day but the issue is that in tropical weather between 10 am and 5pm the sun is burning hot. You won’t last more than couple of hours in it without an umbrella and tons of water. Note that the last Electric Shuttles will ride at 3:30 pm, so if you are in the end of the parc you will have to exit by foot.

The Kid Zoo is a safe space for children and animals to meet and be in direct contact. In there you’ll be able to feed and pet sheeps, baby goats and other unharmful animals. This place is very friendly and is one of the only place in the park where you will be able to pet animals.

Some of the Zoo employees will give you some leafs to feed the animals. Our son was a bit young to walk around a play with the animals but we still managed to take a great picture of his interaction.

The Bird Show is located in an arena near the entrance and the Kid Zoo. The show takes place two times a day at 10 am and 2 pm. Like the Zoo, the show is targeted for families. You will see some bird perform tricks in a humorous and cheerful ambiance. The highlight of the show is a bird taking money from the volunteers and a competition between two Parrots. Let’s go Jerry !

The Main Zoo Attractions are diverse. You will be able to see from far some animals in an open environment like flamingos, monkeys, camels, elephants, etc. Some other animals like reptiles will be located in a cave, where you can only see them through a window.

Most of the stops dedicated to one type of animal will have a dedicated area for resting, snacking or drinking but also a place to queue up for getting back into the shuttle. Since the weather is so hot, you will find a lot of food and ice cream stands and self vending machines. Beware the price will be expensive. Count 50,000 vnd for a Bánh Bao (Baozi) or 70,000 vnd for a decent Ice cream.

One of our favorite part of the Zoo was the Bird Aviary. It is an open space with birds freely flying around including some very big birds. That’s how a Zoo should be in our opinion as soon as humans and animals can coexist, they should be free and sharing the same space.

The highlight of our day was the restaurant inside the Giraffe enclosure. This restaurant is located between the Bird Aviary and the Safari section of the Zoo. It’s an open air restaurant with a lot of tables and a simple menu like the one you would find in a fast food.

The restaurant is offering food such as Burgers and fries, Spaghetti Bolognese, Fried Chicken and other popular dish. The prices are honestly a good deal for the location, much more than the 40,000 vnd saucisse sold in the other snack sections.

You will have to make the line to order and wait in your table to be served. We paid 140,000 vnd for the Burger Combo with fries and a Drink. The service is quite fast and the place usually crowded with people.

You can pay additional money to get a box of veggies and bananas serving as food for the Giraffe. Technically, the giraffes are supposed to have a long enough neck to reach your table but in truth, you’ll have to get up your chair not to disturb your neighbors during lunch. We really like the concept of this restaurant and enjoyed feeding an Huge but Kind animals like Giraffes.

Finally there is a section of the Zoo emulating the experience of a Safari. The only difference being the animals are in captivity and instead of riding a Jeep, you will be riding the bus ! So in one hand you will be protected by widows but on the other hand you will have to watch from a predefined circuit behind a glass.

The ride last around 15 minutes. Inside the bus a speaker will present in Vietnamese the different animals and some facts about them. Animals can be seen in both sides of the bus and there are sections separated with double gates checkpoints, so the animals don’t eat each other.

In this section you will be able to take a closer look to Tigers, Lions, Bears, Zebras and other animals. Riding the bus makes it a bit of an industrial experience almost like riding a slow train in an attraction park.

I think the appeal of going to a Safari is to watch animals lives in their natural habitat, meaning they can be chasing a prey or doing something else interesting during their daily life. Unfortunately in a Zoo, most of the animals will either be eating or laying.

We understand, there have to be compromise since it is a Zoo aimed at families including kids. So there shouldn’t be any form of risk. Also to be fair, the animals were not afraid of the bus and were willing to stay very close to it.

Going to Vinpearl Safari was overall a good experience. The park is big enough for a full day of visit. The circuit is well thought and most animals can be seen with ease. The Electric Cart Drive is a must in our opinion even though sometimes you will need to walk an be patient to see the animals.

The Giraffe Restaurant is in our opinion something to try. Even though the Zoo is closing at 4 pm which is very soon, we were able to see most of it and be exhausted at the end. Having to carry a young baby and the climate didn’t helped too.

BUY YOUR TICKET FOR VINPEARL SAFARI 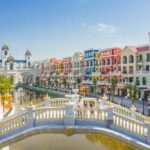 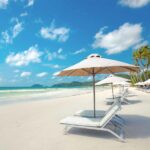