Pho is a traditional, famous dish in Vietnam especially in Hanoi. Pho is the most popular dish among foreign tourists, because it has an extremely attractive and an unusually delicious taste. That’s why Pho is served in many other countries as well.

The main ingredients of Pho

The recipe and the process

Broth is the most important part of pho, to have a good taste it is necessary to use beef or pork bones. First, you need to wash the bones and then put them in a pot to boil with cold water.

Put grilled ginger and onion in the broth bring it to a boil, it will foam, skim off the foam until the water is clear. Vietnamese love a tasteful and clear broth.

Then add spices to the pot such as cardamom, ginger, star anise, cloves, coriander seeds, cinnamon stick and simmer until the sweetness from the bones melts. The spices have to be cooked slightly before to release their flavors.

After the broth is available, put the pho noodles in a large bowl, put the beef, add the green onions and finally pour the boiling broth into the bowl.

We usually eat Pho for breakfast but you can easily find a restaurant that sells Pho all day and the menu at the restaurant is diverse with different kinds of beef parts : tái chín, tái gầu, tái nạm, tái bắp, gân, bò viên… which are different parts of the beef like the filet, brisket or joints.

Pho is served with a plate of cilantro, basil, onion, coriander, basil, bean sprouts , lemon and we eat Pho with chinese donuts stick and drink iced tea. On the table will be fish sauce, vinegar, chill, spoon and chopsticks. The price for a bowl of Pho usually costs 35.000 – 90.000 vnd. For the upscale places the dac biet or special version can go up to 110.000 vnd.

I tried Pho in a few restaurants in France and i was shocked because the bowl of Pho was huge and the broth is very delicious like in Vietnam.

And have all kinds of beef cuts in a bowl unlike in Vietnam where you can choose a specific cut. To be more specific, you will have the filet which will be half cooked since in France you can eat the meat uncooked, briskets, intestines, joints, beef meat balls, and some fatty meat as well.

In France they eat Pho with a plate of bean sprouts and lemon. On the table have fish sauce, salt, chili sauce, vinegar…The price for a bowl of Pho costs between 12 and 14 euros. They also have extra large options.

At the end of the day Pho in France taste very similar to Pho in America, the only difference is the broth is more likely to be salty than sweet.

If they had a plate including of cilantro, basil, onion, coriander, basil, bean sprouts , lemon and Chinese donuts sticks, this dish would be prefect.

I hope they can keep the broth as good as it is because as an expatriate who crave for my hometown food, I am glad I can find some here.

If the dish are more filled here in France, around two or three time more food and always fresh home made rice noodles, the price also reflects this quality. With that current inflation in Europe, this has become a bit of an expensive dish.

My favorite Pho in France

Couple of other good restaurants 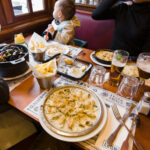