Le Monde Steak is a french style restaurant franchise specialized in steaks. Well implanted in Vietnam especially in Hanoi and Aeon Malls, this restaurant proposes dishes that are supposed to be originating from France.

As a French Vietkieu, I can already tell you that most of their dish are nothing like the food you would find in France, but is it still a good restaurant and do they have a bit of the french culinary genius in their recipe ? That’s what we will try to find out together in this article.

The locations from this franchise are mainly located in Hanoi, only some other major cities like HCMC and Hai Phong have some restaurants.

In Aeon Mall, the design of the restaurant is very open and reminiscent of the famous Indochine style architecture, very french from the asian perspective but in real life French restaurants tends to look a bit different.

I quite like the decoration and setup though, I just wish it was a bit more isolated since most of what you’ll see is the mall. The restaurants is on the smaller size compared to the other restaurants in the foodcourt but I think it’s enough for this type of joint, often used for small gathering anyway.

The menu is composed of classic starters, main courses, desserts and drinks. None of these dishes are really typical of french cuisine, it’s rather a mixture of European food.

For Example you can have a famous Magret de Canard Fumé or Smocked Duck Breast with some Gnocchi which is a mixture of cereal originating from you’ve guessed it Italy.

Pastas are obviously from Italy as well, but to give credit to Le Monde Steak those Pastas are not the traditional recipe you would find in the country shaped like a boot.

They are more like a sophisticated version of it, perhaps like french people would actually cook it in some fancy places.

You’ll obviously find in this restaurants steaks. They can be like that classic Striploin cut, but you can also have a Ribeye imported from America like most joint here in Vietnam.

You also have more fancy races of beef coming from Japan, notably one named Fuji. Whether this meat comes from Japan or is just marketed as Japanese is hard to tell.

You also have some more french cuisine like a jarret d’agneau or lamb shank or a classic pavé de saumon also called salmon steak.

For us, the experience was very basic. We were served some free appetizers with bread and butter. The appetizers were nothing like the ones you would get in Jackson Steakhouse when it comes to quality. Just some small piece of dry breads like a biscotte but with the size of crouton, not very appealing.

The bread offered with butter is what we call industrial bread in France which is very cheap compared to a traditional baguette. The small toast with aubergine chutney and pâté were on the very basic side again. If someone foreign to French food may think it’s good, if you already taste the real thing it doesn’t compare at all.

We ordered a sort of spaghetti with bolognese as starter to be sure to be filled and yet the plate for these spaghettis was very small, barely enough for one person actually.

The quality was decent, the pasta or tagliatel were fresh but overly cooked and the sauce was good but nothing special. The price of the plate was not expensive at least.

Fortunately the quality of the steak was good. The steak I ordered from Japan was tender and very delicate in taste. The cooking was made on a grill and the medium rare came a bit raw, which I don’t mind personally.

Where things went wrong was with the side dishes. As you can see in the picture there is something very wrong with the quantity of vegetables in this plate. I think Le Monde Steak have mistaken regular food with gastronomic food.

When you go for a steak you expect a plate filled with side dish, but if you notice in all of the menu’s pictures, all the plate are very scarce and filled with negative space. French people eat as much as any country for their main dish.

The Lamb Shank served for my wife was also good but again the side dishes were very small in portion. Vegetables are very inexpensive in Vietnam and these dish are what we called Gourmand which means greedy for food and is normally served in very generous portion.

I think the image that comes out of peoples mind when talking about French food is the Gastronomic plate from Michelin starred restaurants, so that’s what this Franchise is trying to sell.

The drinks and desserts were classic and nothing to fancy about.

The food in Le Monde Steak is not bad per say, I would even say that overall the food taste good and above average. The issue comes with a lack of authenticity when it comes to French recipe, which I can understand, since everything has to be tuned for the Asian Market. But selling gastronomic portion of side dishes and giving industrial bread is just a poor decision in my opinion. It just reflect an inaccurate view of french food imagined by americans.

Perhaps we didn’t have the chance to chose the right recipe which comes with the right amount of food, but even after finishing our meals we still felt hungry for a dessert, which is very unusual when going to the restaurant and sharing a starter.

This restaurant is not all bad and I would like to return to try some of their other items but it’s really hard to chose a place like this one over a place like Jacksons Steak House where the location, the atmosphere and the food actually doesn’t feel like a engineered franchise aiming to sell the idea of french food. 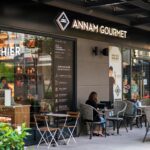 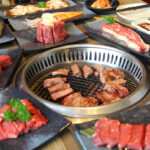