Indochine reffers to the name used by France for the country of Vietnam during the French colonial occupation. During this era, a mix of Vietnamese and French architecture was born. This Indochine Style both takes its inspiration from the East and the West to create something unique : an architecture that is both luxurious and natural at the same time.

There are several variations of this style, ranging in both end of the spectrum.

The more luxurious style use mainly black and white as primary colors, with some very sharp contrast and edges. They are especially used in luxurious places such as expensive 5 stars hotels or lush Villas / Condos like the ones you can find in Vinhomes Riverside.

This erudit and elitist style is very reminiscent to me of high end fashion brands. A Prestigious Status Symbol both representing sharpeness, competence and elegance but in a tropical environment.

The more natural style, the one I like the most, has more tones and warmth to it. More inline with the nature surrounding it. More cheerful, it uses a palette of colors such as yellow, beige, brique, brown, reds and greens. It is in my opinion a perfect mix of art and nature for tranquility.

The common point of both end of the spectrum is the openness to the outside environment, letting the natural light and air come in, so there are almost no more barriere between the inside and the outside.

As the tropical environment is luxuriant, most of the furnitures, doors and windows are made of wood and some of them are typical of the tradional Vietnamese Style.

In Vietnam furnitures used to be a symbol of someone wealth and success. The furtniture called Tủ or Cabinet is the most important piece in the house, as it is used as a hotel for ancestors and more.

So the chairs and furnitures were curved out of premium woods and were usually by far the most expensive items in the house. The Indochine style keeps this tradition and sometimes even uses the same woods and famous bordeaux tones used by Vietnamese.

Finally, it is impossible to talk about this architecture without mentioning the French movie Indochine by Régis Wargnier. The Domain of Eliane played by Catherine Deneuve is to me one of the most beautiful home I’ve ever seen in my life and it is insane that more than half a century later this architecture can still be seen and enjoyed.

If I had unlimited budget for building a house, I would probably go this path and I would chose the warmth and nature over the luxurious declination. 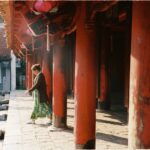 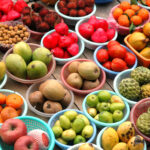