Sushi Kei is another restaurant of the Red Sun Group well implanted in Aeon Malls and serving Japanese food. But unlike iSushi part of the Golden Gate group, Sushi Kei is not an all you can eat buffet but more serving sushi like traditional restaurants.

If you compare the price by piece, Sushi Kei is very expensive but is the quality following the same trend ? That’s what we’ll try to find out in this article.

The Sushi Kei we tried was located in Aeon Mall Long Bien. The location is like any franchise, regular in size with a reminiscing Japanese decoration. The place was fairly full but we went there on a Sunday at 12, so basically rush hour.

There’s nothing particular to note about the decoration or the inside of the restaurant, it is very classic alsmot dull. Perhaps compared to iSushi, the kitchen is not open and the inside a bit more dim but that’s about it.

The menu is very traditional of that of franchise restaurants selling Japanese food. My guess would be that in a real sushi restaurant they only serve Sashimi, Sushi, Maki and perhaps Californian rolls.

But since this is a franchise, you can also get Takoyaki, Gyoza and other famous Japanese specialties with an average quality.

The sushi menu is very similar of what you would find in France. Perhaps the only difference is the quantity. Usually in France we can call a boat with an assortments of fresh fish, enough for two people to eat. In this case the boat is a 599,000 vnd option with less pieces but overall more variety.

Unfortunately, all the product weren’t present in reality when compared to the picture. For example, we didn’t have any avocados or sea urchins, which was honestly why I chose this combo in the first place. Now if the restaurant is missing some ingredients I can understand, but even I can buy avocado pretty easily in this period.

In this menu they have traditional nigiri sushi, some sashimi sets, maki, temaki, californian rolls, but honestly there’s absolutely nothing original in this menu. Everything is quite standard and safe. I can understand the necessity for safety in a franchise but at the same time, their proposition value is not very exciting.

When it comes to drinks, the glass were very small. I ordered a guava fresh juice and my wife a coke. I oriented my choice towards a Juice after seing the cup of water melon juice being big. Unfortunately it wasn’t the same cup.

You can have a choice between regulars Japanese wines, beers but also Korean Soju, like in Sumo BBQ, again reminding you you are in a Franchise restaurant.

One thing interesting about Sushi Kei is that they have a button on the table to call the staff. I think this idea is great and would work even better in buffet restaurants. Since here we only order once, this button is less useful as it could potentially be.

Our first order came in quickly enough and it was the first time I tried this pan fried dish looking like a pancake. It really taste similar to Takoyaki in my opinion, perhaps the only interesting thing was the Katsuobushi or thin layers of smoked bonito moving around like it was still alive.

I am used to eat my sushi just a bit fresh, but these came out at room temperature which is the right way to do it apparently. The sushis were better made than the ones in iSushi overall. The pieces were ever so slightly better quality also but much lower than what you would find in a real sushi place.

I doubt franchises like this one employ real sushi chefs anyway. The rice is very average, if the consistency is good the taste is too salty in my opinion. Also the ginger vinegared slice came in very small quantity compared to the Wasabi. Luckily some other one came with the Californian roll even more than in the big sushi combo.

One of the problem I have with Japanese restaurant in Vietnam, is that they are as expensive as in Europe which can be understood since products are most probably imported. But also it’s very hard to find some simple but delicious recipe like Californian Rolls with Avocado, Salmon and mayonnaise. Perhaps it doesn’t fit the taste of this market.

The taste of the food sushi included was ok, but compared to the price you pay, I was honestly expecting more. We ended getting a udon soup for our kid and again it didn’t looked or tasted like anything special.

Our drinks were very small like previously said, I almost ordered an extra bottle of water but since we were in a mall, I decided to wait. I thought it was enough with paying extra money for almost the same thing.

Sushi Kei is a franchise restaurant, so quality can’t be very high since often this type of joint are made out of business motivations and not passion. But still the quality could be higher I believe, especially for the price.

For example our pieces of Tuna were more than average, the color was more pink than red. Even the pieces of sushi with Tuna in the Aeon Mall food court had a better color.

Whenever I eat sushi and I feel very thirsty afterward, it’s never a good sign. It often means that the rice in the sushi was not balanced and pretty salty.

It’s not that the food is bad in Sushi Kei, it’s just that it’s very average for the price. We ended up paying around 1,200,000 vnd which is all you can eat in iSushi. If the quality is slightly superior, it’s not enough to justify the price in our opinion.

If you really want Sushi go to a real Japanese restaurant and if you want a lot of sushi, go to iSushi Hai Ba Trung. That’s our two cents.

Book a table in Sushi Kei 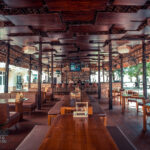 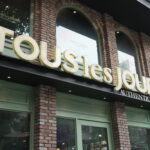