Sumo Yakiniku BBQ or Sumo BBQ is another restaurant from the Golden Gate Group. This group also own notable restaurant of the same type like Gogi.

If Gogi is supposed to be the Korean Barbecue, Sumo BBQ on the other hand is the Japanese style Barbecue restaurant.

More upscale and expensive, this joint is famous for being one of the most costly option in the mall. But does expensive means better in terms of experience or quality ? That’s what we’ll try to find out in this article.

As a restaurant part of the Golden Gate Group, Sumo BBQ have most of their restaurants located in Aeon Malls and just a few others will be in the city.

We tried the one located in Aeon Mall Long Bien, which is outside on the first floor next to McDonalds and Koi Thé.

The restaurant is fairly big. The inside is nice with a Japanese interior design and drawings of Sumo in the wall. The ceiling is also decorated with Shoji Screen, very reminiscent of traditional house in Japan.

The tables are very reminiscent of what you would find in Gogi except the grills which are using a Japanese style and the aspiration system seems to be under the table not on the top. The charcoal very interestingly doesn’t have a smell or taste which is a bit odd for a barbecue but very Japanese in the idea. I wouldn’t be surprised if Gogi share the same combustible.

Another oddly detail is the Soju disposed on the table. Soju is obviously a preferred alcohol beverage in Korea, but in Japan they are probably more focused on sake or beer.

Like most barbecue joint, the menu is quite simple. You can have a regular menu for relatively decent price, but you’ll always want to go with the all you can eat option, which is 499,000 vnd in Sumo BBQ.

Like Gogi, Sumo BBQ have a tablet for each table to help with the selection of plate coming in. This process is so much more convenient than the traditional order or paper like in iSushi. It is even more convenient since it will show you the option that are included in your menus and the one you’ll need to pay an extra cost.

The menu is honestly very reminiscent of Gogi House. You almost have the same options with some exceptions :

The salad was just decent, even if they were offering a Cá trích and Salmon salad. The sauce was basic and not as good as what you would get in Gogi with for example a bacon salad.

The drinks and desserts are basically the same across the franchise. Fruit juice costing 50,000 vnd or 30,000 vnd regular soda and probably the same price for beers.

Again, the experience is very similar to what you would experience in Gogi. Perhaps the only difference is that the staff will actually cook the entire order for you, so you basically just have to put the food in your mouth.

We are still not sure if this method is good or not, since in one hand it makes it more convenient but on the other hand you need to eat at a certain tempo which was pretty fast to be honest and also cooking the food to your liking is for us part of the experience.

We ended-up asking the waitress to do it by ourself. I think she was a bit concerned about the overcooked meat hanging in the barbecue but for us in Asia eating raw or medium rare meat is not without risks, since the cold chain can easily be broken.

As soon as the grill will have burn on it, a waiter will come to change the grill and as soon as the charcoal becomes weak, it will be replace with brand new one as well.

When it comes to taste and product quality, for us nothing is extraordinary. It’s pretty much standard quality. I would even go as far to say as you can have a better experience and product in other joint for a less expensive price.

The only cuts that were worth mentioning were the waygu beef, the squid, the beef tong and some fish. The rest is very very standard and the taste is not something memorable, even the meat who have been marinated doesn’t taste that good.

Overall the food is very salty and will leave you very thirsty. My wife and I had to share 3 drinks and were still thirsty at the end.

We ended up on a sweet note with the desserts and they were just average and pretty much exactly like what you would find in the other restaurants of the group.

The tab was around 1,185,000 vnd including tax which is still okay compared to European prices but for Vietnam it’s more expensive than other options.

Overall I am pretty disappointed with Sumo BBQ it was supposed to be the high end version of Gogi or Gyu Kaku, but it ended up being just another franchise trying to sell “Japanese Barbecue” for a premium price.

Even when you see Sushi and Californian rolls in the menu, they are actually out of bounds and will cost you as much as you would pay in a real sushi place.

For me there’s really nothing special or interesting about this restaurant and it is way inferior to Gogi in my opinion which is cheaper and actually have thin ribeye slice included in their buffet.

The Waygu is decent and the other “original” options like fish and squid are good as well. But there is simply not enough to justify the difference in price with other places like Gogi or Gyu Kaku.

If you are looking for BBQ, we recommend you to look else where. We highly suggest Gogi which is a Korean barbecue from the same group but overall the quality is better over there.

Book a table for Sumo BBQ 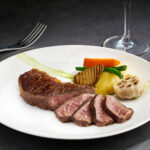 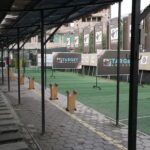